These series are more than just stepping stones into the world of chapter books. They’re also full of heart and hilarity. Meet the minds behind these fun titles – and introduce the young readers in your life to their works during this exciting panel. 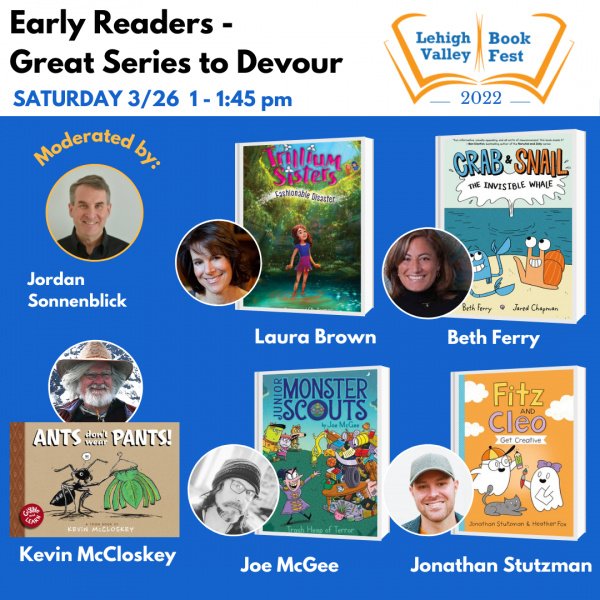 Moderated by Jordan Sonnenblick, The Boy Who Failed Dodgeball (Scholastic 6/22)  Jordan Sonnenblick is the author of the acclaimed Drums, Girls & Dangerous Pie, After Ever After, Notes from the Midnight Driver, Zen and the Art of Faking It, Falling Over Sideways, The Secret Sheriff of Sixth Grade (2/19) and The Boy Who Failed Show & Tell (2/21). He lives in Eastern PA, with his wife and two children.

Joe McGee, Junior Monster Scouts & Night Frights (Aladin/Simon & Schuster), and Creepy Cafetorium (Epic!)  Joe McGee loves to write about monsters and magic and other strange, curious, and quirky things. He grew up with his nose in a book and his imagination exploring other worlds. He has an MFA in writing for children and young adults from the Vermont College of Fine Arts and an MFA in writing from Rowan University. Joe teaches at Sierra Nevada University’s low-residency MFA program and English at Eastern West Virginia Community and Technical College. He is a former Army officer and lives in the mountains of West Virginia with his wife (also a children’s author), Jessica Rinker.

Laura Brown, Trillium Sisters (Holiday House)  Laura Brown is an early childhood expert, who collaborates with businesses and organizations to create high-quality educational media properties and products. She has written curricula and scripts and served as Content Expert and Research Director for series produced by Nick Jr., Disney Junior, DreamWorks Animation Television, PBS Kids, Universal Kids, and many others. A mother of three, she lives in Tenafly, NJ, but in another life, she would happily live in a treehouse in the forest.

Beth Ferry, Crab & Snail and Fox & Rabbit (Harper Collins)  Beth Ferry is the New York Times–bestselling author of Stick and Stone, illustrated by Tom Lichtenheld, The Scarecrow, illustrated by The Fan Brothers; We Believe in You, illustrated by Molly Idle; and many other books.  She lives in New Jersey with her husband, three children, and two bulldogs.

This feature require that you enable JavaScript in your browser.
END_OF_DOCUMENT_TOKEN_TO_BE_REPLACED

This feature require that you enable JavaScript in your browser.
END_OF_DOCUMENT_TOKEN_TO_BE_REPLACED