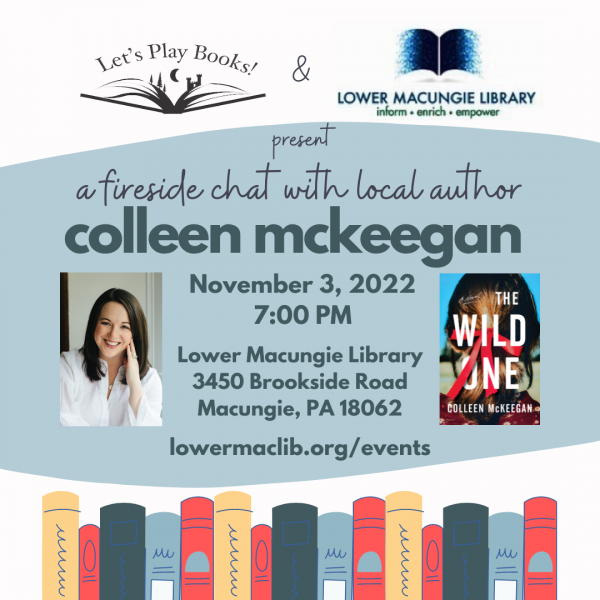 Join us at the Lower Macungie Library for an evening with Colleen McKeegan, author of The Wild One (Harper 6/22). Pre-order a copy to pick up at the event or in the shop prior to the event (below).

Register to attend the event HERE.

Amanda Brooks is a born-and-bred New Yorker with an envious life: she’s in a great graduate school program, lives in a cozy Tribeca apartment, and is head-over-heels for her handsome, committed boyfriend. But Amanda’s life isn’t as picture-perfect as it seems. For over a decade she’s been hiding a dark secret—a secret that goes back to that summer at Camp Catalpa when a man died in the woods. Fellow campers Catherine and Meg were there too, and in the years since, not one of them has ever spoken about what happened that day.

Until Amanda slips—and the truth threatens to explode the tightly controlled façade of her life.

When her past begins to poison her present, threatening her relationship, Amanda has no one to turn to except the two women who know her most monstrous self. Reuniting with Catherine and Meg one last time, Amanda is desperate to put the demons of that twisted summer to rest.

But when trusting anyone, even one another, starts to feel like a wildly risky proposition, just how far will these three go to keep the truth from emerging—and their lives from unraveling?

About the author: Colleen McKeegan is a writer and editor whose work at Marie Claire was nominated for a National Magazine Award. She has also held staff and freelance roles at various publications, including The Cut, Fast Company, Bloomberg, and Fortune. A native of Pennsylvania, and a graduate of Georgetown University, Colleen now lives with her family in New York. As a child, she spent five summers at an all-girls sleepaway camp in the Poconos. The Wild One is Colleen’s debut novel.

The Wild One: A Novel (Hardcover)

This feature require that you enable JavaScript in your browser.
END_OF_DOCUMENT_TOKEN_TO_BE_REPLACED

This feature require that you enable JavaScript in your browser.
END_OF_DOCUMENT_TOKEN_TO_BE_REPLACED