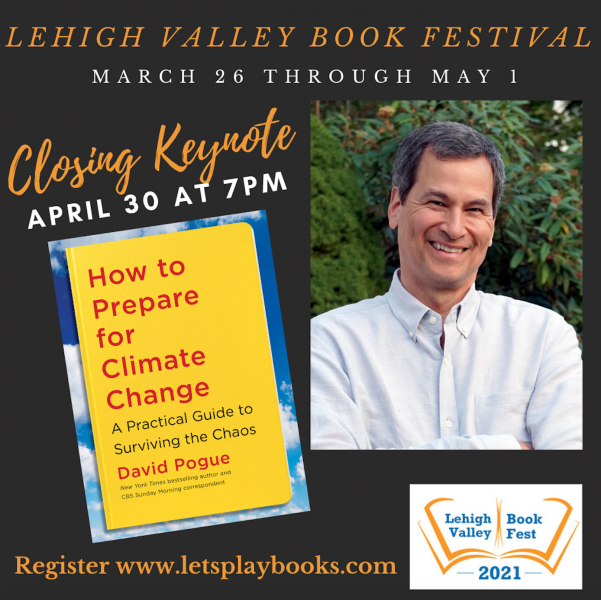 Each ticket includes one copy of David's book, and a chance to win a gift card for $25. Click here to purchase your ticket.

Session capacity is limited, do not delay! Your book may be picked up at Let's Play Books Bookstore during open hours prior to the event or after.

How to Prepare for Climate Change is a practical and comprehensive guide to surviving the greatest disaster of our time, from New York Times bestselling self-help author and beloved CBS Sunday Morning science and technology correspondent David Pogue.

David Pogue was the New York Times weekly tech columnist from 2000 to 2013. He’s a five-time Emmy winner for his stories on CBS News Sunday Morning, a New York Times bestselling author, a five-time TED speaker, and host of 20 NOVA science specials on PBS.

He’s written or co-written more than 120 books, including dozens in the Missing Manual tech series, which he created in 1999; six books in the For Dummies line (including Macs, Magic, Opera, and Classical Music); two novels (one for middle-schoolers); his three bestselling Pogue’s Basics books of tips and shortcuts (on Tech, Money, and Life); his new how-to guides, iPhone Unlocked and Mac Unlocked; and his 2021 magnum opus, How to Prepare for Climate Change.

For a complete list of Pogue’s columns and videos, and to sign up to get them by email, click here. On Twitter, he’s @pogue; on the web, he’s at www.davidpogue.com. He welcomes civil email exchanges at david@pogueman.com.

Dr. Gary G. DeLeo is an Emeritus Professor of Physics at Lehigh University, where he was employed for forty years before retiring in 2020. He has served as Associate Dean in the College of Arts and Sciences, and Chair and Associate Chair of Physics. Professor DeLeo’s early research was in the field of theoretical solid state physics, primarily studying atomic imperfections in otherwise perfect semiconductor crystals. His passion for astronomy led to his change in research to astrophysics, where he studied binary stars. For thirty years, Professor DeLeo directed considerable attention to precollege science outreach and teacher training in science. He has presented about 1,500 science outreach programs since October 2003, and many others prior to 2003. He loves to share his understanding and appreciation of science, and do it with passion, excitement and laughter. He is the recipient of seven awards and honors for excellence in teaching and outreach.

* Any books not picked up will be held at the bookstore for 1 month, through June 1, then donated.

This feature require that you enable JavaScript in your browser.
END_OF_DOCUMENT_TOKEN_TO_BE_REPLACED

This feature require that you enable JavaScript in your browser.
END_OF_DOCUMENT_TOKEN_TO_BE_REPLACED