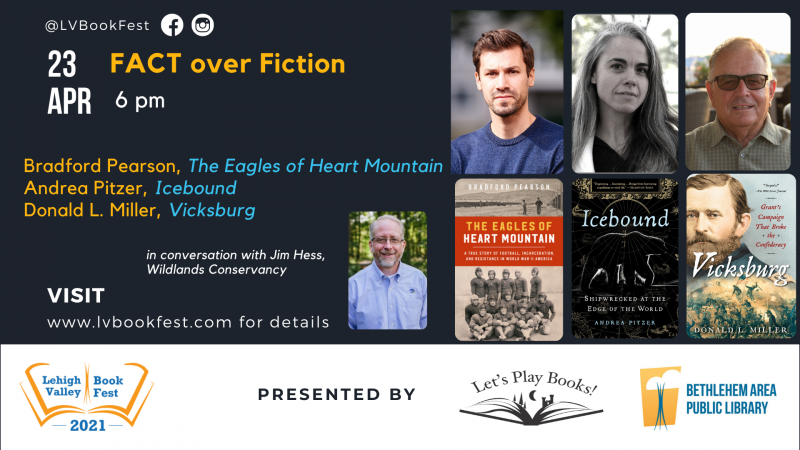 This virtual event is free and open to the public. Registration is required due to limited session capacity. Book sales are encouraged through Let’s Play Books Bookstore.

Local? Purchase books on this page to pick-up at Let's Play Books Bookstore.

Out of the area? Click here to purchase on our Bookshop Page and have shipped directly to your home.

The Eagles of Heart Mountain honors the resilience of extraordinary heroes and the power of sports in a sweeping and inspirational portrait of one of the darkest moments in American history. An immersive, deeply moving, and never-before-told tale about the Heart Mountain internment camp in Wyoming during World War II and the greatest high school football team in Wyoming history, whose Japanese American players and their families, and the nearly 14,000 people of the relocation center, confront xenophobia, war, and what it means to be American, and display their own resilience and creative resistance.

Bradford Pearson is the former features editor of Southwest: The Magazine. He has written for The New York Times, Esquire, Time, and Salon, among many other publications. He grew up in Hyde Park, New York, and now lives in Philadelphia. The Eagles of Heart Mountain is his first book.

Icebound, Shipwrecked at the Edge of the World, by Andrea Pitzer

In the bestselling tradition of Hampton Sides's In the Kingdom of Ice, a riveting and cinematic tale of 16th-century Dutch polar explorer William Barents and his three harrowing Arctic expeditions--the last of which resulted in a relentlessly challenging year-long fight for survival. Icebound combines a gripping tale of survival with a sweeping history of the great Age of Exploration--a time of hope, adventure, and seemingly unlimited geographic frontiers. Pitzer's reenactment of Barents's ill-fated journey shows us how the human body can function at twenty degrees below, the history of mutiny, the art of celestial navigation, and the intricacies of building shelters.

Andrea Pitzer is a journalist whose writing has appeared in The Washington Post, The New York Review of Books, Outside, The Daily Beast, Vox, and Slate, among other publications. She has authored two previous books, One Long Night and The Secret History of Vladimir Nabokov—both critically acclaimed. She received an undergraduate degree from Georgetown University’s School of Foreign Service in 1994, and later studied at MIT and Harvard as an affiliate of the Nieman Foundation for Journalism. She grew up in West Virginia and currently lives with her family near Washington, DC. Icebound is her most recent work.

The acclaimed account of the longest and most decisive military campaign of the Civil War, in Vicksburg, Mississippi, which opened the Mississippi River, split the Confederacy, freed tens of thousands of slaves, and made Grant the most important general of the war. Winner of the Civil War Round Table of New York’s Fletcher Pratt Literary Award, Winner of the Austin Civil War Round Table’s Daniel M. & Marilyn W. Laney Book Prize & Winner of an Army Historical Foundation Distinguished Writing Award

Donald L. Miller is the John Henry MacCracken Professor of History Emeritus at Lafayette College and author of ten books, including Vicksburg, and Masters of the Air, currently being made into a television series by Tom Hanks. He has hosted, co-produced, or served as historical consultant for more than thirty television documentaries and has written for The New York Times, The Washington Post, and other publications.

The Eagles of Heart Mountain: A True Story of Football, Incarceration, and Resistance in World War II America (Hardcover)

Icebound: Shipwrecked at the Edge of the World (Hardcover)

This feature require that you enable JavaScript in your browser.
END_OF_DOCUMENT_TOKEN_TO_BE_REPLACED

This feature require that you enable JavaScript in your browser.
END_OF_DOCUMENT_TOKEN_TO_BE_REPLACED