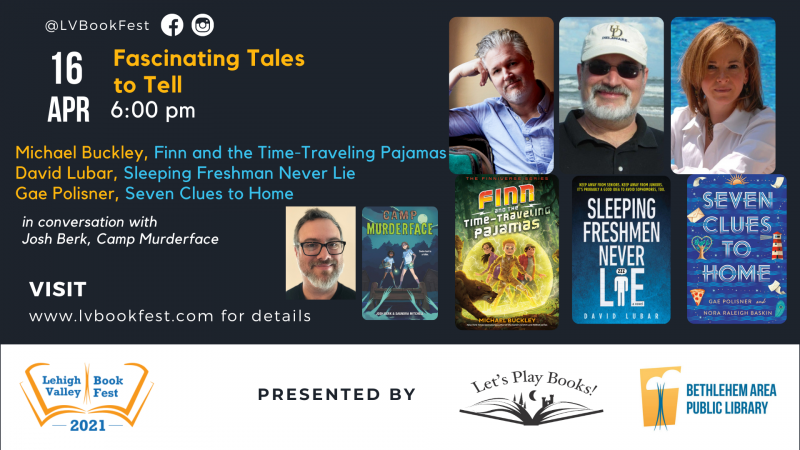 This virtual event is free and open to the public. Registration is required due to limited session capacity. Book sales are encouraged through Let’s Play Books Bookstore.

Local? Purchase books on this page to pick-up at Let's Play Books Bookstore.

Out of the area? Click here to purchase on our Bookshop Page and have shipped directly to your home.

MICHAEL BUCKLEY is the New York Times bestselling author of the Sisters Grimm and NERDS series and the cocreator, writer, and executive producer of Cartoon Network’s Robotomy. He lives in New York City.
Visit Michael online at michaelbuckleywrites.com and follow him on Twitter at @michaelwbuckley and on Instagram at @buckleystopshere.

DAVID LUBAR created a sensation with his debut novel, Hidden Talents, an ALA Best Book for Young Adults. He is the author of the Nathan Abercrombie series, True Talents, Flip, and the popular Weenies short story collections. He lives in Nazareth, Pennsylvania. Look for him online at davidlubar.com, facebook.com/WeeniesStories, and on Twitter @davidlubar.

GAE POLISNER is the award-winning author of In Sight of Stars, The Memory of Things, The Summer of Letting Go, The Pull of Gravity, and Jack Kerouac is Dead to Me. She lives on Long Island with her husband, two sons, and a suspiciously-fictional looking dog. When Gae isn't writing, you can find her in a pool or the open waters off Long Island. She's still hoping that one day her wetsuit will turn her into a superhero.

Josh Berk is the author of The Dark Days of Hamburger Halpin (Knopf 2010), named a Best Book for Teens by Kirkus Reviews and Amazon.com. It was also awarded a Parents' Choice Silver Medal, a starred review from School Library Journal, and a perfect 10 from VOYA. His second comedy/mystery teen novel, Guy Langman: Crime Scene Proscrastinator, was published in 2012 (also by Knopf). In 2013 a new series for younger readers began with Strike Three, You're Dead. He has previously been a journalist, a poet, a playwright, and a guitarist (mostly in bands known for things other than fine guitar playing).

Finn and the Time-Traveling Pajamas (The Finniverse series #2) (Hardcover)

Finn and the Intergalactic Lunchbox (The Finniverse series #1) (Paperback)

Sophomores and Other Oxymorons (Paperback)

Jack Kerouac is Dead to Me: A Novel (Hardcover)

This feature require that you enable JavaScript in your browser.
END_OF_DOCUMENT_TOKEN_TO_BE_REPLACED

This feature require that you enable JavaScript in your browser.
END_OF_DOCUMENT_TOKEN_TO_BE_REPLACED