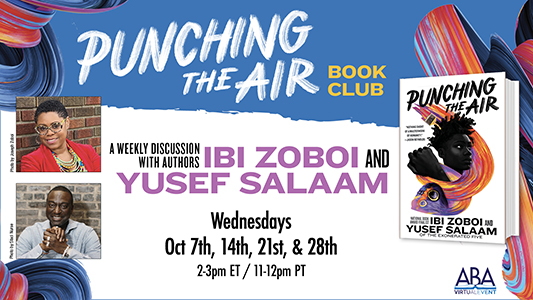 Dr. Yusef Salaam, a member of “The Exonerated Five” (formerly known as “The Central Park Five”) and Ibi Zoboi, author of Pride and the National Book Award finalist American Street, have collaborated on a young adult novel, PUNCHING THE AIR. Written in verse, this searing novel is about a Black, Muslim teen wrongfully sentenced to prison. PUNCHING THE AIR will be published by Balzer + Bray, an imprint of HarperCollins Children’s Books, on September 1, 2020.

Salaam and Zoboi met in a class at Hunter College in 1999, two years after Salaam was released from prison. Salaam was fifteen when he and four other Black and Latino boys were falsely accused, convicted, and sent to prison for assault and rape in 1989 (recently depicted in Ava DuVernay’s Netflix series When They See Us). In 2002, the true rapist and murderer confessed, and the sentences of the then-“Central Park Five” were overturned. After meeting Salaam, Zoboi continued to follow his case, and the two met again while she was traveling to promote her debut young adult novel, American Street. Salaam expressed his interest in speaking to more teens about his experience, and the idea to co-write a young adult novel, inspired in part by Salaam’s experiences, was born.

REGISTER HERE to attend the session.

Pick up your copy in the shop - order on this page, select pay at store, pick up at store.

Not local? Purchase your book here and have it shipped!

PUNCHING THE AIR follows Amal Shahid, a teenager who has always been an artist and a poet. But even in a diverse art school, he’s seen as disruptive and unmotivated by a biased system. Then, one fateful night, an altercation in a gentrifying neighborhood escalates into tragedy. “Boys just being boys” turns out to be true only when those boys are white. Suddenly, at just sixteen years old, Amal’s bright future is upended: he is convicted of a crime he didn’t commit and sent to prison. Despair and rage almost sink him until he turns to the refuge of his words: his art.

“At the center of Amal’s story is the cycle of racial violence that continues to plague this country,” said Zoboi. “But this is not just a story about a crime or race. It’s about the power of art, faith, and transcendence in the most debilitating circumstances.”

Salaam shared, “PUNCHING THE AIR reflects not only my story, but the stories of millions of young boys and girls of color who face the injustice of mass incarceration and the criminal justice system. Books have the power to change the way we think and transform societies. This novel is a continuation of my work to shine a light on the reality of our criminal justice system and inspire young people to advocate for change.”

“It’s rare to have the opportunity to publish a book that feels truly essential to the canon of children’s literature—and PUNCHING THE AIR is such a book,” said Alessandra Balzer, Vice President and Co-Publisher of Balzer + Bray. “Working with Zoboi and Salaam was an incredibly powerful experience. Their writing is unflinching in its indictment of the systemic racism that has led to problems of wrongful conviction and mass incarceration in our country.”

HarperCollins will be partnering with nonprofit organizations to donate copies of PUNCHING THE AIR to incarcerated youth across the country. Partners will include The Campaign for the Fair Sentencing of Youth, an organization working to end extreme sentencing for children, and The Children’s Book Council, the nonprofit trade association of children’s book publishers in North America dedicated to supporting the industry and promoting children’s books and reading.

ABOUT IBI ZOBOI:
Ibi Zoboi was born in Port-au-Prince, Haiti, and holds an MFA in writing for children and young adults from Vermont College of Fine Arts. Her writing has been published in the New York Times Book Review, the Horn Book magazine, and the Rumpus, among others. Her novel American
Street was a National Book Award finalist, received five starred reviews, and was a New York Times Notable Book. She is also the author of Pride and My Life as an Ice Cream Sandwich, which was a New York Times bestseller, as well as being the editor of the anthology Black Enough. She lives in New Jersey with her husband and their three children. You can find her online at www.ibizoboi.net.

ABOUT YUSEF SALAAM:
In 1989, Dr. Yusef Salaam was just fifteen years old when he was tried and convicted in the “Central Park Jogger Case” along with four other Black and Latino boys. The Exonerated Five spent between seven to 13 years behind bars, until their sentences were overturned in 2002. Since then, they received a multimillion dollar settlement from the City of New York for its injustice and were profiled in award-winning films, including The Central Park Five documentary from Ken Burns, Sarah Burns, and David McMahon and the award-winning Netflix limited series When They See Us, written and directed by Ava DuVernay.

Over the past two decades, Yusef has become a family man, father, poet, activist, and inspirational speaker. He continues to share his story with others to educate the public about the impact of mass incarceration and police brutality. He regularly advocates for criminal justice reform, prison reform, and the abolition of juvenile solitary confinement and capital punishment. Yusef is the recipient of a Lifetime Achievement Award from President Barack Obama (2016), the Phoenix Award from the Congressional Black Caucus (2019), an honorary Doctorate of Humanities from Anointed by God Ministries Alliance & Seminary (2014), and a long list of Proclamations—most notably from New York State Senate (2018), and New York City Council (2013).

Yusef lives in Atlanta, Georgia with his wife, Sanovia, and their children. You can find him online at www.yusefspeaks.com.

This feature require that you enable JavaScript in your browser.
END_OF_DOCUMENT_TOKEN_TO_BE_REPLACED

This feature require that you enable JavaScript in your browser.
END_OF_DOCUMENT_TOKEN_TO_BE_REPLACED