A picture is worth a thousand words, but this panel of picture book authors is priceless. Find out what it takes to create a story that really resonates with young minds and what makes picture books different than other types of writing. 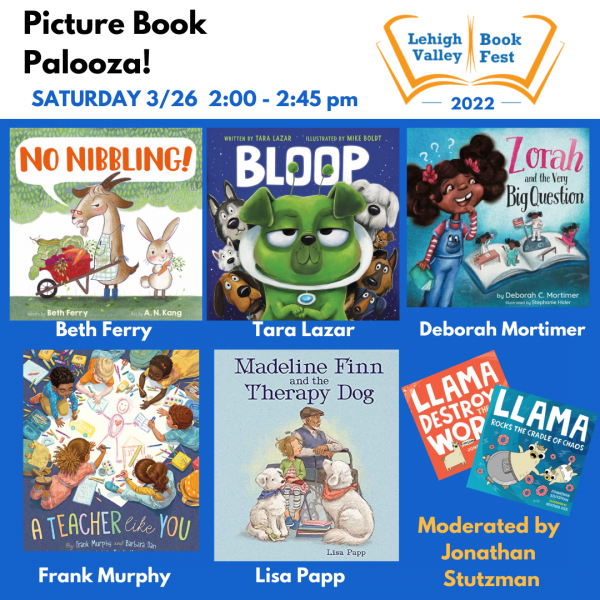 Moderator: Jonathan Stutzman, Llama Rocks the Cradle of Chaos (Macmillan 7/22)  Jonathan Stutzman is an award-winning filmmaker and a picture book author. He is the author of numerous books for children, including Don't Feed the Coos, Santa Baby, the Tiny T-Rex series, the Llama trilogy, and the Fitz and Cleo chapter book series. He received his masters at Temple University for film and digital media.  jonathanstutzman.com

Beth Ferry, No Nibbling! (Macmillan, 3/22)  Beth Ferry is the New York Times–bestselling author of Stick and Stone, Stick and Stone: Best Friends Forever, The Scarecrow, We Believe in You, Fox and Rabbit series; and many other books. She lives in New Jersey with her husband, three children, and two bulldogs. Beth loves writing about the wonders of the beach and never fails to learn something new with every story she writes. You can learn something new about Beth at www.bethferry.com

Deborah C. Mortimer, Zorah and the Very Big Question (Leap Forward Publishing 6/21)  Deborah C. Mortimer is a lawyer, blogger, and former homeschool parent with a passion for writing.  Inspired by her son and young nieces and nephews, Deborah decided to turn her passion for writing short stories and poems into crafting children's books. Zorah and the Very Big Question is the first book in a series intended to follow Zorah on her journey to understand the world around her. The second book, Zorah, The Brave Ballerina is slated to be released in May of 2022.

Lisa Papp, Madeline Finn & the Therapy Dog (Peachtree Publishing 9/20)  Lisa Papp grew up telling stories. With a notebook full of sketches, her early tales featured her cat, stuffed animals, and other nature-y things. Today, Lisa is still making up stories and painting pictures, only now, they fill the pages of children’s books. She has received awards for both her writing and illustration, including a 2011 NAPPA Honor Award, 2012 Storytelling Award, and the 2013 PA Keystone to Reading Award. Lisa lives in Pennsylvania, with her husband, Robert, also an artist, and three wildly creative cats.

This feature require that you enable JavaScript in your browser.
END_OF_DOCUMENT_TOKEN_TO_BE_REPLACED

This feature require that you enable JavaScript in your browser.
END_OF_DOCUMENT_TOKEN_TO_BE_REPLACED