2 pm Everything But the... Dragons? (concurrent) 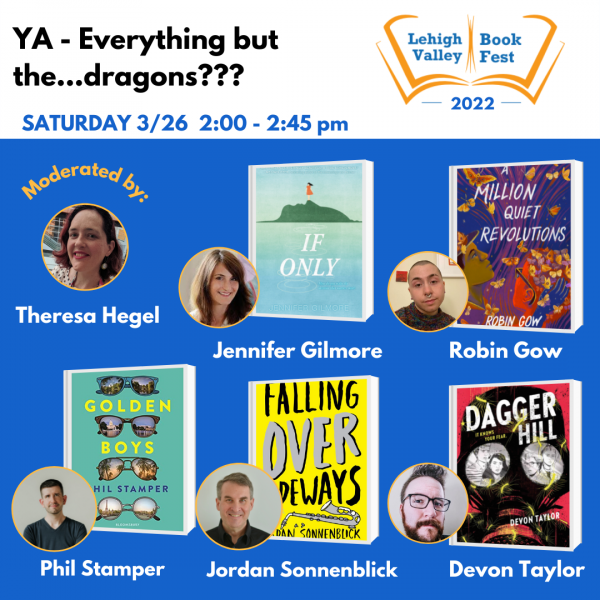 The teenagers these five YA authors write about aren’t slaying dragons or casting spells, but the trials they face are just as monumental. After all, what’s scarier than growing up? And isn’t coming of age and figuring out your place in the world a kind of magic? In this fantastic – if not fantastical – discussion, we’ll talk about writing authentically about adolescence and tackling tough topics in a way that’s engaging for all ages.

Robin Gow, A Million Quiet Revolutions (Macmillan 3/22) Robin Gow is a trans and queer poet, editor, and educator from rural Pennsylvania. They are the director and founder of Transcendent Connections, an organization that provides trans education resources to support trans youth. They live in Pennsylvania with their partner and pug dog named Gertrude. Twitter @gow_robin_frank

Phil Stamper, Golden Boys (Macmillan 2/22) Phil Stamper is the national bestselling author of The Gravity of Us (2/20) and As Far as You'll Take Me (9/21) He grew up in a rural village near Dayton, Ohio. He has a B.A. in Music and an M.A. in Publishing with Creative Writing. And, unsurprisingly, a lot of student debt. He works for a major book publisher in New York City and lives in Brooklyn with his husband and their dog. www.philstamper.com • @stampepk

Devon Taylor, Dagger Hill (Swoon Reads 8/21) Devon Taylor was born in Las Vegas, Nevada, and currently lives in Pennsylvania with his wife and two daughters. His day job consists of sneaking around the house with ninja-like stealth to avoid waking up his kids. When not writing, reading, or tediously typing out text messages with all the correct spelling and punctuation, he spends his time with his family. He is the author of Dagger Hill and the Soul Keepers duology -The Soul Keepers  & The Ghost Keepers.

This feature require that you enable JavaScript in your browser.
END_OF_DOCUMENT_TOKEN_TO_BE_REPLACED

This feature require that you enable JavaScript in your browser.
END_OF_DOCUMENT_TOKEN_TO_BE_REPLACED